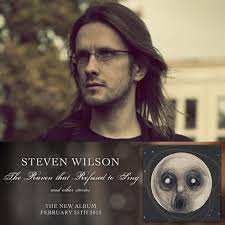 The Raven That Refused to Sing (And Other Stories) is the third solo album by British musician Steven Wilson, released by Kscope Music Records on 25 February 2013. Each track on the album is based on a story of the supernatural. Alan Parsons, well known in part for his involvement in Pink Floyd's The Dark Side of the Moon, was responsible for engineering the album. (More below) 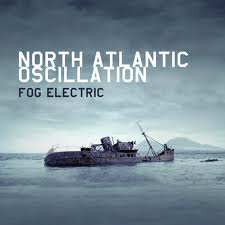 North Atlantic Oscillation are a post-progressive rock and electronica band from Edinburgh, Scotland. They are signed to the Kscope record label and released their debut album Grappling Hooks on 22 March 2010. The band currently consists of Sam Healy (lead vocals, guitars, keyboards), Ben Martin (drums, programming) and Chris Howard (bass, bass synth, backing vocals).
Their music has been compared to contemporary American bands such as Grandaddy and The Flaming Lips, Scottish bands such as The Beta Band, and 70s prog-rock band Pink Floyd.[5] Their music combines elements of electronic beats with alt-rock guitars and "hazy vocals".[2] The band are responsible for the production of every one of the samples used in their recordings.[1]


The Raven That Refused to Sing

After finishing the touring cycle for Porcupine Tree's The Incident in 2010, Wilson would spend the rest of the year, and 2011, recording and releasing his second solo album, Grace for Drowning, and Blackfield's third album Welcome to my DNA. While initially planning on returning to Porcupine Tree in "early 2012",[3] this soon changed, with Wilson announcing that he would continue to focus his future on his solo career. This new focus included a second leg of touring in support of Grace for Drowning, in the first half of 2012, and then returning to the studio with the live band to record a third solo album.[4] aiming for an early 2013 release,[5] with plans for touring in support of the album for "much of the year" – throughout 2013.[6]

"Luminol" was first performed by Wilson and his band on the second half of his Grace for Drowning tour. The song takes its inspiration from a busker, who, according to Wilson, is "there every single day. It doesn’t matter what the weather is like; he’s always there, playing his acoustic guitar and singing these songs. Snow, rain, gale force wind – nothing will stop him from being in his spot. ... He’s the kind of guy who is so set in his routine that even death wouldn’t stop him." Wilson considers the notion "that somebody could be a ghost in life, as well as a ghost in death, somebody who’s completely ignored even in their lifetime – it hardly makes a difference; and death doesn’t make a difference, either; it doesn’t break the routine."[7]
"Drive Home" is based on a suggestion from illustrator Hajo Mueller. It is "about a couple driving along in a car at night, very much in love; the guy is driving, and his partner – his wife or girlfriend or whoever she is – is in the passenger seat, and the next minute she’s gone." The ghost of the man's partner eventually returns, "saying, ‘I’m going to remind you now what happened that night.’ There was a terrible car accident, and she died, etcetera, etcetera – again, the idea of trauma leading to a missing part of this guy’s life. He can’t deal with the reality of what happened, so he blocks it out – like taking a piece of tape and editing a big chunk out of it."[8]
According to Wilson, "The Holy Drinker" concerns "a guy who’s very pious, very religious, preachy and self-righteous. I’m thinking of TV evangelist-types – guys who are prepared to tell people that they’re living their lives wrong and that they’re missing something because they don’t believe in God or whatever it is." The man, who, despite criticising other people's lifestyles, is himself an alcoholic, unwittingly challenges the Devil to a drinking competition, with disastrous consequences: "Of course, you can’t beat the Devil at a drinking competition – you can’t beat the Devil at anything – and so he loses. ... He gets dragged to Hell."[9]
"The Pin Drop" addresses "the concept that you can be with someone because it’s comfortable and convenient, not because there’s any love or empathy." Wilson explains that "The song is basically sung by the wife. She’s dead, she’s been thrown in the river by the husband, and she’s floating down in the river while singing this song – from beyond death, beyond the grave, as it were." The song considers "The idea... that sometimes in a relationship there can be so much tension, so much unspoken resentment and hatred, that the tiniest thing can set off a violent episode, and in this case, one that ends in tragedy. The sound of a pin dropping on a floor can be the thing that instigates the fury."[10]
The fifth track on the album explores "the story of the watchmaker, the guy who is meticulous about his craft, but he never has any kind of emotional outburst, nor does he express violence or any extreme emotions whatsoever." It concerns "a couple who have been together for 50 years or more, purely because it was convenient and comfortable." Wilson explains that "The watchmaker ends up killing his wife and burying her under the floorboards of his workshop. But, of course, she comes back, because she’s been with him for 50 years; she’s not going to leave him now." The song concludes when "the wife comes back to take him with her, which", Wilson suggests, "is another classic ghost story, in a way."[11]
The title track explores the story of "an old man at the end of his life who is waiting to die. He thinks back to a time in his childhood when he was incredibly close to his older sister. She was everything to him, and he was everything to her. Unfortunately, she died when they were both very young." The man becomes convinced that a raven, who visits the man's garden, is something of "a symbol or a manifestation of his sister. The thing is, his sister would sing to him whenever he was afraid or insecure, and it was a calming influence on him. In his ignorance, he decides that if he can get the raven to sing to him, it will be the final proof that this is, in fact, his sister who has come back to take him with her to the next life."[12]

A music video for "The Raven That Refused to Sing" was released on 8 February 2013. The video, based on Hajo Mueller's artwork,[13] was directed by Jess Cope and Simon Cartwright, who were also responsible for the video for Storm Corrosion's "Drag Ropes".[14] The album was released on February 25, 2013.

The album has been generally well-received. The Guardian praised the album for being "stripped-down art rock thud before morphing seamlessly into all manner of wildly evocative soundscapes, melodic crescendos and mellotron-drenched fever dreams ... this album shows Wilson to be one of modern rock's most cunning and soulful protagonists."[17] Allmusic deemed it "the best of Wilson's three solo projects", stating that the album is "skillfully written music with expertly arranged compositions of color, nuance, texture, dynamics, narrative, and artfulness played by a group of stellar musicians."[16]

All music composed by Steven Wilson.