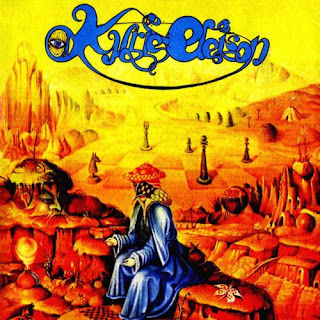 KYRIE ELEISON was an Austrian symphonic rock band, founded 1974 by Gerald Krampl (keyboards) together with two school friends, Karl Novotny (drums) and Felix Rausch (guitar). The music is symphonic, progressive rock at its finest, with Mellotrons and keyboard leads, and moods ranging from quiet piano passages to walls of sound. They blended the symphonic mastery of GENESIS with the thematic aspects of VAN DER GRAAF GENERATOR.

Influenced by GENESIS during its "Nursery Cryme" era, KYRIE ELEISON recorded "Blind Window's Suite" in 1975, and "The Fountain Beyond The Sunrise" in 1976. The boxed-set "The Complete Recordings 1974-1978" will also include a third CD containing 70 min. of live acts from 1974, material mostly taken from "Blind Windows" and some from "The Fountain Beyond the Sunrise", with high sound quality. All in all, this boxed-set is a great and complete discography of this underground Austrian Progressive rock band, that more or less remained an underground group until now. 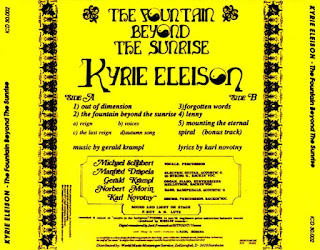 Sacerdos
Paso Robles, California
Brutus and Cassius descended from the sky and founded Sacerdos in 2007. 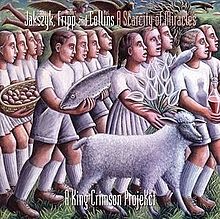 A Scarcity of Miracles is an album by Jakszyk, Fripp and Collins. It united former King Crimson musicians Robert Fripp and Mel Collins with singer-songwriter and guitarist Jakko Jakszyk (who previously fronted, sang for and played guitar in 21st Century Schizoid Band, a project set up to reunite King Crimson members from the 1960s and 1970s lineups of the band and to play the band's music from that period; he later became a full member of the band).
The basis for the album came from guitar improvisations recorded by Jakszyk and Fripp in Wiltshire, England with no particular intention of recording an album.[3] With Fripp's agreement, Jakszyk took the resulting recordings and reworked them as songs. Collins (a frequent Jakszyk collaborator) subsequently "heard unplayed sax waiting to be given voice" and joined the developing project.[3] With the majority of music now recast as songs, an album took shape. Two other ongoing King Crimson members - bass guitar/Chapman Stick player Tony Levin and drummer Gavin Harrison - subsequently recorded the rhythm tracks.[4]
A Scarcity of Miracles was released with the subtitle of "A King Crimson ProjeKct". This in turn led to speculation that it might be the basis of the next lineup of King Crimson (the main band itself having been on hiatus since 2008, and having used the ProjeKcts as research and development work since 1999). Fripp himself gently denied and clarified this at the time by describing the record as "one of my favourite albums of those where I am a determining element. It has the Crimson gene, but it is not quite KC."[4] However, a new line-up of King Crimson was announced in September 2013 including everyone involved in the album.
Like the covers of many King Crimson albums produced by Discipline Global Mobile, the cover of A Scarcity of Miracles features a painting by P J Crook.

Starless Starlight is "a fascinating album length exploration of a melody - composed by David Cross and Robert Fripp - that emerged as one of the key themes on the King Crimson masterpiece, Starless"