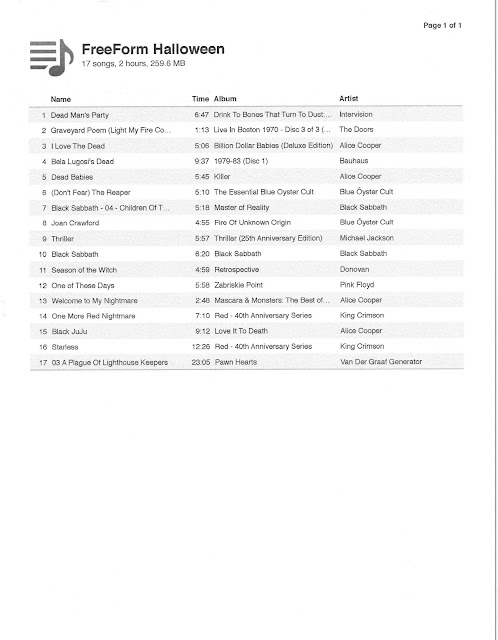 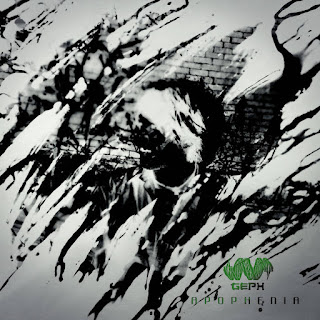 GEPH is an instrumental progressive jazz metal trio riding the very cutting edge of contemporary music. With Josh Goldbergand John Tyler Kent on Chapman Stick, and Josh Merhar on drums, the three of them sound as big as a five-piece, and work to expand the modern conceptions of arranging and composing in a heavy, intense and still succinctly musical format.

Apophenia (/æpoʊˈfiːniə/) is the tendency to perceive connections and meaning between unrelated things. 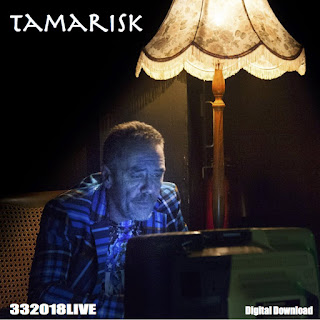 Coming from the Northeastern part of London, Tamarisk evolved around 1982 from the ashes of Chemical Alice (Mark Kelly of Marillion fame had spent time with this group). Originally founded by Steve Leigh on keyboards, Andy Grant on vocals and Richard Crichton on drums, they secured a solid line-up only when Crichton was replaced by Richard Harris along with Peter Munday on guitars and Mark Orbell on bass. The group went on to produce two very rare cassette E.P.'s, a self-titled in 1982 and ''Lost properties'' ta year later. Shortly after a line-up change occurred with Nick May taking over the bass duties and Brian Roberts being the drummer. In 1985 Tamarisk briefly performed as a trio of Leigh, Grant and May under the name of ''Corrupted by Toys'', before disbanding for good.
Leigh spent some time with Quasar before forming Landmarq, while May had a nice career, initially joining Dagaband, then for a short time Jadis, appeared for a while with The Enid, while his latest collaboration was with Karnataka around 2005. Almost 30 years after Tamarisk's demise the compilation album ''Frozen in time'' was released, containing the material of both the early E.P.'s of the group, thus giving the chance to prog fans to taste the band's unpolished, raw and underground Neo Prog sound. 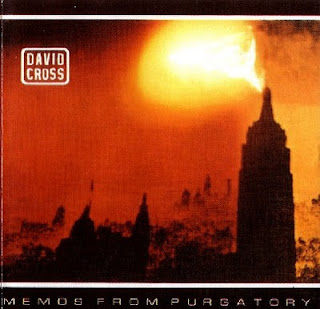 Cross has also worked in theatre both musically and as an actor. In 1999, he formed Noisy Records. 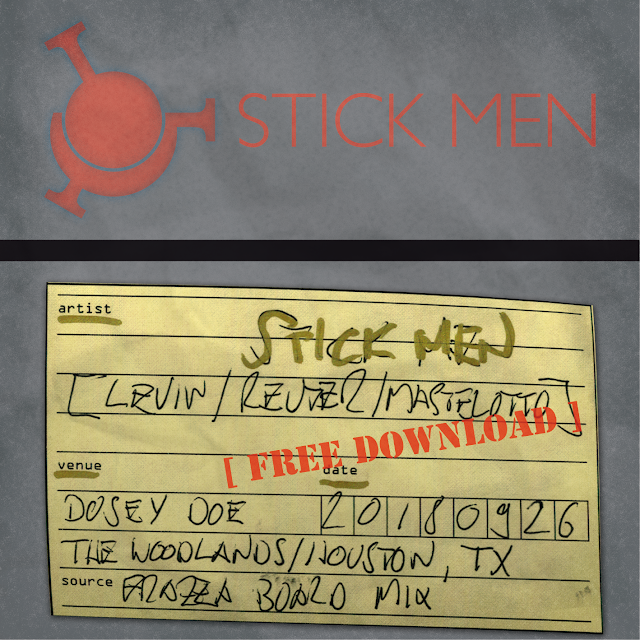 We are now making recordings like this publicly and officially available for purposes of archiving, (our own) historical research, and for your enjoyment as a fan and collector. Each show is offered for appropriately chosen price and the proceeds from these downloads will get split evenly between Tony, Markus, Pat, and Robert, the four people who worked as a team to make this music come alive. Feel free to donate more if you can.

We appreciate your interest and your support. We have many audience recordings lined up for this series (unauthorized audience recordings, but also Robert Frazza's board mixes, as well as many of his multi-track recordings, which still need to get mixed), and we will be adding more in good time.

Special thanks to the audience for coming out to your concerts.

We are offering to our fans the full Woodlands / Houston concert of the band at Dosey Doe’, professionally recorded by our sound engineer Robert Frazza on September 26th this year. 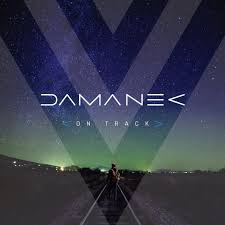 From The Prog Report:
A recent gem of an album was released in 2017 on GEP (Giant Electric Pea) records by a new band called Damanek.  The album titled ‘On Track’ came out in May, 2017,  and is the brainchild of Guy Manning, former member of The Tangent and the United Progressive Fraternity, which released a fantastic album in 2014 called ‘Fall in Love with the World’.  Manning, also an accomplished solo artist, has built a great band here with music similar to the UPF album.  The band premiered the new material at least year’s Summer’s End festival in Europe.
The album is a mix of world music and prog, featuring lots of percussion, sax and horns, multiple keyboards and harmonies.  The opening song with the odd title “Nanabohzo and the Rainbow” would fit nicely on a Toto record, while the second track and likely single “Long Time, Shadow Falls” is a track Peter Gabriel might approve of.  “Believer-Redemmer” is a straight-up smooth jazz track, but it fits nicely here, while “Oil of Arabia” has a Steely Dan vibe.  And of course there is the epic closer “Dark Sun” which will satisfy any Prog urges.
Guy Manning holds nothing back on this release and the band assembled is top-notch.  This is not heavy prog metal but make no mistake, this is outstanding musicianship.  For a relaxed and enjoyable experience, this is a great album.  We recommend checking this one out. 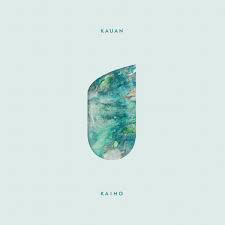 Kaiho is KAUAN’s eighth album following 2015’s lauded Sorni Nai, and focuses on childhood and the transition to adulthood, when the death of a loved one shatters halcyon beginnings and makes clear the stark reckoning that awaits in the end.
"This is a new circle in KAUAN’s life. We’ve been slowly walking through the genres of music, and now I feel we are coming to a destination. To me, it sounds like a very mature and comprehensive sequel to our 2009 album Aava tuulen maa. And yeah, it will have a totally different sound because we've taken on a new approach and recorded with very old-school methods (most of the sounds were sculpted before tracking and there was almost no digital processing)."     -Anton
Tonight we'll be playing the entirely instrumental version of this album recently released as a digital download on Bandcamp. 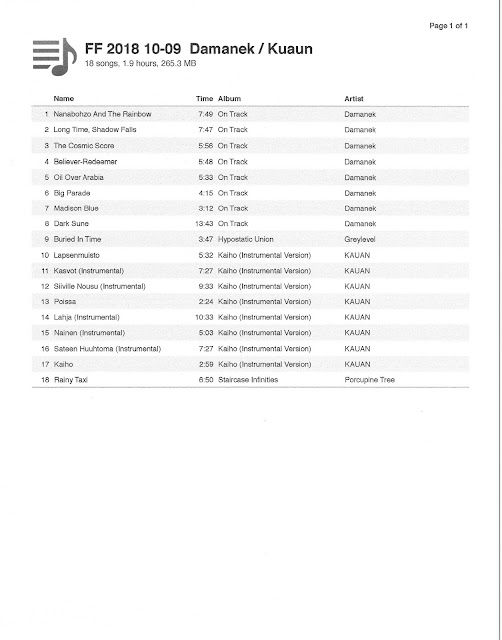 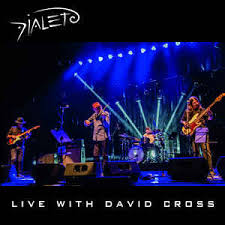 When Dialeto released their previous album, 'Bart'k In Rock', famed ex-King Crimson violinist David Cross made an appearance on one song, and in my review I said that he had made such an impact I really wish he has played on more. Well, at this concert on 22nd July 2017, he stuck around for way more than just one song. Coming onto stage in time for the sixth number on the CD and staying there all the way through to the end. The Brazilian trio are mostly instrumental, and here they were promoting their last album, which took compositions by B'la Bart'k and then moved them into their own genre, with lots of improvisation. Interestingly, one of the songs featured on this CD is 'Mikrokosmos 78', which Dialeto hadn't worked on, and it was only after the suggestion of Cross that a version was put together especially for this concert.
Cross is a very busy musician, but one hopes that he sticks around for more gigs and recording with the trio, as they all blend their skills so very well together, to create an album that is exciting, invigorating, and just bloody great fun to listen to. The interaction between all four is incredible, as they extend and move away from songs and take them into new areas. The first eight songs are by Diaelto, and then we have four from King Crimson and one from David's own band. 'Starless' is instantly recognisable, and gets a reaction from the crowd; it is the perfect way to close out the concert (with drummer Fred Bayley showing that he is a fine singer, and it is a choice for the band to be instrumental as opposed to lack of skill). But before then everyone has been treated to an amazing concert, with four great musicians bouncing ideas off each other, allowing the music to take them where it needs to go. Dialeto have been building quite a reputation, and deservedly so, and hopefully this work with Cross will see them being recognised by a far wider audience, as it is certainly deserved. 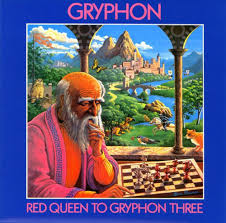 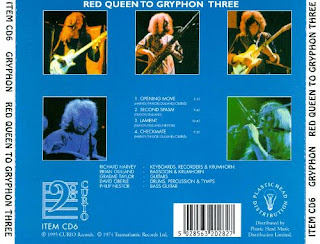 Red Queen to Gryphon Three is the third studio album made by the band Gryphon. The album was released on Transatlantic Records in the UK with a blue cover, while Bell Records released the album in Canada with the cover border in black.
Red Queen to Gryphon Three is a concept album based loosely on a game of chess. The music, which frequently evokes a medieval mood, blends and alternates Baroque, Renaissance, English folk and progressive rock music styles. Themes are presented, developed and recapitulated in the fashion of classical music. 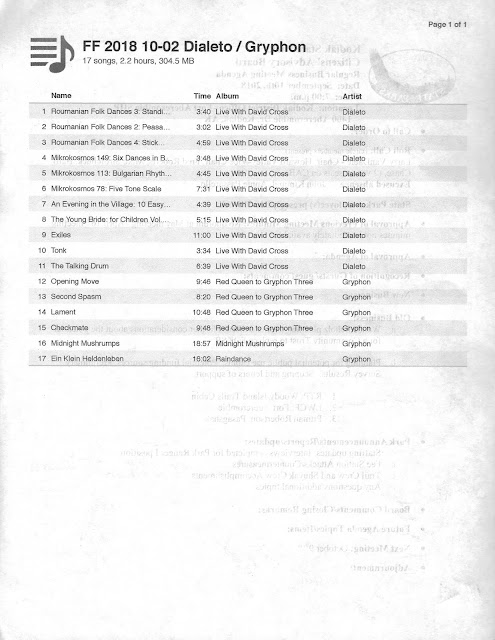