New remixes by (who else) Mr. Steven Wilson. 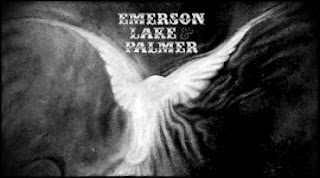 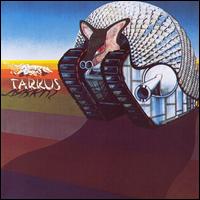 Emerson, Lake & Palmer, also known as ELP, are a sporadically active English progressive rock supergroup.[1] They found success in the 1970s and have sold over forty million albums[2] and headlined large stadium concerts. The band consists of Keith Emerson (keyboards), Greg Lake (bass guitar, vocals, guitar) and Carl Palmer (drums, percussion). They are one of the most popular[3] and commercially successful progressive rock bands.
The ELP sound is dominated by the Hammond organ and Moog synthesiser of the flamboyant Emerson. The band's compositions are heavily influenced by classical music in addition to jazz and – at least in their early years – hard rock. Many of their pieces are arrangements of, or contain quotations from, classical music, and they can be said to fit into the sub-genre of symphonic rock. However, Lake ensured that their albums contained a regular stream of simple, accessible acoustic ballads, many of which received heavy radio airplay.[4] Lake, besides providing vocals, bass guitar, electric guitar and lyrics, also produced the band's first five albums.
Their debut album was simply titled Emerson, Lake & Palmer, and was released in late 1970. It was mostly a collection of solo pieces. Keith Emerson contributed a series of treatments of classical pieces (such as Bach's French Suite No. 1 in D minor, BWV 812 and Bartok's 'Allegro Barbaro'), Carl Palmer provided a drum solo (called "Tank") and Greg Lake provided two ballads, beginning with the folky, extended work "Take a Pebble". It was the ballad, "Lucky Man", which was a song Lake wrote when he had his first guitar at the age of 12,[18] that brought the band to prominence. It received heavy radio play in the UK and Europe, and also became a surprise hit in America.[19] The commercial success of "Lucky Man", combined with a strong performance at the Isle of Wight festival (released on CD in 1997 as Live at the Isle of Wight Festival 1970), brought ELP rapidly to prominence.
Tarkus, released in 1971, was their first successful concept album, described as a story about "reverse evolution". Combining a side-long song with an assortment of hard rock songs, an instrumental and even some comic songs, it was quickly cited as landmark work in progressive rock. The epic "Tarkus", recorded in just 4 days, is a seven-part rock suite which incorporates a number of complex time signatures. The breadth and complexity of the music combined with the series of William Neal paintings incorporated into the sleeve art helped to cement ELP's reputation as being on the forefront of progressive rock music. 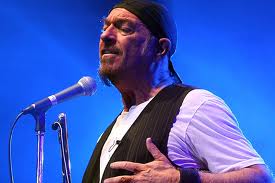 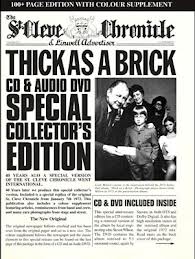 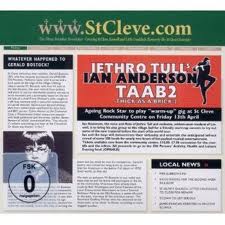 Thick as a Brick

From Wikipedia, the free encyclopedia
Jump to: navigation, search
Thick as a Brick is the fifth studio album by the English progressive rock band Jethro Tull. Released in 1972, the album includes only one song, the title track, which spans the entire album. Thick as a Brick was deliberately crafted in the style (and as a "bombastic" and "over the top" parody[6]) of a concept album. The original packaging, designed like a newspaper, claims the album to be a musical adaptation of an epic poem by a (fictional) 8-year-old boy, though the lyrics were actually written by the band's frontman, Ian Anderson.

Thick as a Brick was Jethro Tull's first deep progressive rock offering, coming four years after the release of their first album. The epic album is notable for its many musical themes, time signature changes and tempo shifts--all of which were features of the progressive rock scene which was emerging at the time. In addition, the instrumentation includes harpsichord, xylophone, timpani, violin, lute, trumpet, saxophone, and a string section--all uncommon in blues-based rock.
Band leader Ian Anderson was surprised by the critical reaction to the previous album, Aqualung, as a "concept album", a label he firmly rejects to this day. In an interview on In the Studio with Redbeard (which spotlighted Thick as a Brick), Anderson's response to the critics was: "If the critics want a concept album we'll give the mother of all concept albums and we'll make it so bombastic and so over the top."[6] Ian Anderson has been quoted as stating that Thick as a Brick was written "because everyone was saying we were a progressive rock band, so we decided to live up to the reputation and write a progressive album, but done as a parody of the genre." With Thick as a Brick, the band created an album deliberately integrated around one concept: a poem by an intelligent English boy (named Gerald) about the trials of growing up. Beyond this, the album was a send-up of all pretentious "concept albums". (The simile "Thick as a brick", in English, is an expression signifying someone who is "stupid; slow to learn or understand".[7])
Anderson also stated in that interview that "the album was a spoof to the albums of Yes and Emerson, Lake & Palmer, much like what the movie Airplane! had been to Airport." The formula was successful, and the album reached number one on the charts in the United States.
On April 3, 2012, Ian Anderson released a long-delayed sequel, Thick As a Brick 2, on the EMI label, continuing the story of Gerald Bostock. The original in a deluxe CD/DVD edition with a large book will be reissued by EMI on November 6, 2012.

Beginning in March 1972, the band performed most of the album (excluding some of the edits on side 2) on tour for nearly a year. The performances grew in length to about 90 minutes, as the original piece was expanded with additional instrumental interludes and the instrumentals "God Rest Ye Merry Gentlemen" and "Bouree." At the conclusion of what was side one of the LP, a 5-minute "news and weather" comedy routine was inserted, giving the band (and audience) a break from the non-stop music. At concerts in Germany and Italy, the routine was presented in the native language. The performance of side two of the LP was expanded with the addition of a long drum solo. The remainder of the set list (with occasional changes throughout the tour) consisted of "Cross-Eyed Mary", "A New Day Yesterday", "Aqualung", "Wind-Up", "Martin's Guitar Solo", "Locomotive Breath" and "Wind-Up (Reprise)." "Wind-up" included an unreleased piece referred to by bootleg fans as "The Hard Headed English General". Later live performances of "Thick as a Brick" were a shortened version of the first side, as heard on the live album Bursting Out (1978).
Ian Anderson performed the entire album live on tour in 2012, the first complete performances since the 1972 tour.[8] The original LP cover, which opens up as a 12-page newspaper.
The original LP cover was designed as a spoof of a 12-by-16 inch (305 by 406 mm) multiple-paged small-town English newspaper, entitled The St. Cleve Chronicle and Linwell Advertiser, with articles, competitions, adverts, etc., lampooning the parochial and amateurish local journalism that still exists in many places today, as well as certain classical album covers. Jethro Tull's official website states about the mock-newspaper: "There are a lot of inside puns, cleverly hidden continuing jokes (such as the experimental non-rabbit), a surprisingly frank review of the album itself [written by Anderson under a pseudonym], and even a little naughty connect-the-dots children's activity."[9] The "newspaper", dated 7 January 1972, also includes the entire lyrics to "Thick as a Brick" (printed on page 7), which is presented as a poem written by an 8-year-old literary prodigy, Gerald "Little Milton" Bostock, whose disqualification from a poetry contest is the focus of the front page story. This article claims that although Bostock initially won the contest with "Thick as a Brick," the judges' decision was repealed after a multitude of protests and threats concerning the offensive nature of the poem, furthered by allegations of the boy's psychological instability. Throughout the newspaper's many articles are subtly scattered various references to the lyrics, to Gerald Bostock, to Jethro Tull, and to other peculiar parts of the newspaper itself. The satirical newspaper was heavily abridged for conventional CD booklets, but the 25th Anniversary Special Edition CD cover is much closer to the original, and the 40th anniversary boxed version contains a nearly-complete replica of the original newspaper, missing only an article spoofing former U.S. Tull distributor Reprise Records.

By 2012 the album received four major releases on CD: the first release (1985),[10] the MFSL-release (1989),[10] the 25th Anniversary Edition (1997), and the 40th Anniversary Edition (2012). Whereas the first release and the MFSL-release run with identical speed, the 25th Anniversary edition runs 0.5% slower[citation needed]. The 1997 edition also has increased loudness (see Loudness war) and does not feature Ian Anderson whispering "Yeah" after the coda of Part II.
The 40th Anniversary Edition was released in November 2012, and includes a CD, a DVD, and a book. The CD contains a new mix of the album. The DVD contains a 5.1 surround sound mix (in DTS and Dolby Digital), the new stereo mix in high resolution, and the original stereo mix in high resolution. The album was also rereleased on vinyl at the same time.[11] This edition lists part one at 22:45 and part two at 21:07.
The website for the 40th anniversary edition lists these digital parts:

The song itself has been played on many classic rock radio stations across the globe. Most opt to play the single edit, clocking in at approximately three minutes. However, some prefer the longer 7-minute version which contains the Side One main theme, "Come On Ye Childhood Heroes", and the closing theme from Side Two.
In 1983, Chrisye released a cassette called Resesi (Recession) which had a cover inspired by the album. The album was rereleased on CD in 2004.
At the end of the The Simpsons episode "Girls Just Want to Have Sums", Martin Prince sings "Thick as a Brick" until Lisa Simpson hits him with a folding chair to shut him up. The actual song plays over the closing credits.
Car maker Hyundai used the song in one of their commercials in the early 2000s.


The 2012 follow-up: Thick as a Brick 2: Whatever Happened to Gerald Bostock?

On 1 February 2012 Ian Anderson announced via the official Jethro Tull website that there was to be a follow-up album, TAAB2: Whatever Happened To Gerald Bostock?. According to the Jethro Tull website, the sequel is "a full length Progressive Rock 'concept' album worthy of its predecessor. Boy to man and beyond, it looks at what might have befallen the child poet Gerald Bostock in later life. Or, perhaps, any of us."
The album was released on 2 April 2012. It describes five different scenarios of Gerald Bostock's life, where he potentially becomes a greedy investment banker, a homeless homosexual man, a soldier in the Afghan War, a sanctimonious evangelist preacher, and a most ordinary man who runs a corner store and is married and childless. The original Thick as a Brick consists of only two long tracks comprising a single song, while TAAB2: Whatever Happened To Gerald Bostock? lists 17 separate songs merged into 13 distinct tracks (some labelled as medleys), although also all flowing together much like a single song. To follow the style of the mock newspaper on the original Thick as a Brick, a mock online newspaper was set up, simply titled StCleve.


Chart positions of the original 1972 album 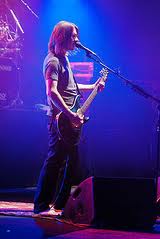 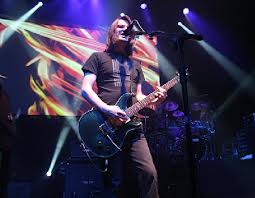 Get All You Deserve recorded live in Mexico City, April 2012
Posted by The Yellow Porcupine Links to this post