Tonight's program is dedicated to Lew Fisher, a long time fan and promoter of progressive music.  His group, the Progressive Music Society, went through several incarnations as technology changed until he closed it down a few years ago.  The group was an invaluable source of discussion and suggestions for fans of progressive rock.  Lew continues his advocacy for prog through his daily Facebook posts.  Because he is such a fan of Italian prog, I asked him for some suggestions other than the standard PFM (Premiata Forneria Marconi) and tonight's program is the result.   Good listening everyone!   Notes on all the tracks and bands played tonight are below. The complete playlist for tonight's show appears after the music notes.

The first half of tonight's show will spotlight Maurizio Di Tollo's 2015 release, "Memorie di uno sparring partner" which Lew feels is destined to be a prog classic. 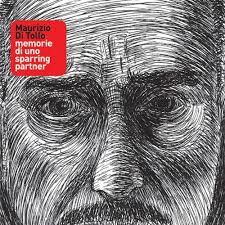 Italian multi-instrumentalist Maurizio di Tollo certainly keeps busy with a wide range of progressive music related work! The last few years have seen him drumming on La Maschera di Cero's well-received `La Porte del Domani' and several Hostsonaten discs, playing keyboards and drums on a cool self-titled instrumental album by the trio `Arena Di Tollo Marras', and even delivering a superb solo prog-rock album all his own entitled `L'Uomo Trasparente' in 2012. He presents a follow-up to that one in 2015 with `Memorie di uno Sparring Partner' (Memoirs of a Sparring Partner) , and it's a shock to discover it's not really much of a progressive rock album at all. Now before all the RPI and prog-fans start clenching their butt-cheeks in panic, make no mistake - Maurizo and his musical guests here (many of them Italian prog notables) have delivered an intelligent and very modern rock album full of extremely well-played instrumentation around very strong song-writing and effective melodies, but prog elements do show up, just in skilfully executed shorter passages in and around the actual tunes, which are always the focus.Along with Maurizio's own world-weary vocals and a general melancholic air that pervades all the tunes, `Memorie...' isn't really too far removed from Steven Wilson's recent solo works, as well as the darker moments of Fabio Zuffanti's more recent projects. The moody and sometimes dark rock of the album also mixes in elements of electronica, jazz and a definite singer- songwriter quality, though not in a folky manner that the term is often applied to. Instead the pieces revolve around very personal and reflective thoughts, which will likely be even more appreciated by those who speak Italian.
Looking at some of the particular highlights, piano-driven opener `Sempronio' comes to life once it picks up in tempo with subtle jazzy vibes, and it also holds a beautiful trumpet solo in the final moments. A definite solo Steven Wilson-like sound burns through `Il Cielo e' un Uomo Solo', where plaintive piano, gently humming Hammond organ, whirring dreamy synths and warm acoustic with emotional heart-wrenching electric guitar solo spots weave a seductive mix together, all while the tune itself holds a particularly lovely melody. Same goes for `La Vita Buona', a seductive the late-night contemplation of creeping electronics, ghostly piano, Anathema-like slow-burn electric guitar smoulders and dramatic upfront drumming behind Maurizio's raspy vocal.
`I Padroni del Vapore' is a welcome harder diversion with a crashing brooding heaviness and snarling vocal, `Se Questo e' l'Amore' is a stark piano rumination, `Il Poeta' a tough rocker, `Amore Mio, Hai Ragione' a powerful ballad fuelled by Mellotron on the chorus, and instrumental interlude `A Occhi Chiusi' begins on delicate piano before the whole band roar to life, aggressive chunky bass and hard driving drums the highlight. The longest piece at over seven minutes, `La Paura' is definitely one of the more overtly proggy pieces, a soaring theme with heavy bursts, programed loops and even triumphant and uplifting moog soloing, and Maurizio delivers a confident, commanding lead vocal fitting of a final closing musical statement.
After the initial disappointment that this isn't a full-blown prog-rock work to compare to his previous work (and sure enough, closer inspection of the BTF Records press release about the disc states that particular fact ' always pays to read the fine print beforehand!), `Memorie...' still quickly reveals itself to be a perfectly impressive work all its own. As prog-rock listeners, it's nice to sometimes take a step back and listen to something less busy or complex, yet no less intelligent and artistic, and Maurizio and his musical collaborators have definitely delivered that here. If you're in the mood for a thoughtful, early A.M hours kind of introspective listen and can give it several plays to link it sink in, ` Memorie di uno Sparring Partner' proves to be a fragile, haunting little gem.
Three stars as a prog album, four stars as a stylish and smart rock album.
Studio Album, released in 2015 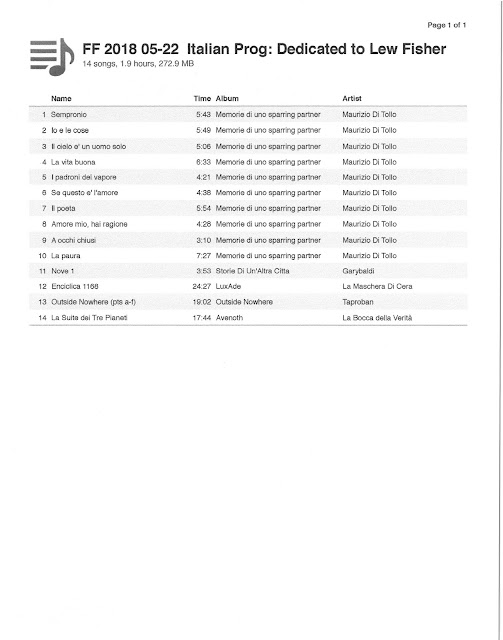 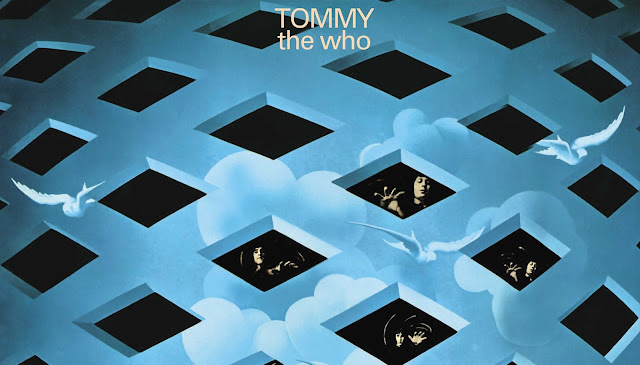 Tonight as part of KMXT's Spring Fundraiser, we will be playing Tommy in its entirety without interruption.  This is your opportunity to support Kodiak Public Radio by going to kmxt.org and making a donation or becoming a sustaining member.
Tommy is the fourth studio album by the English rock band The Who, a double album first released in May 1969. The album was mostly composed by guitarist Pete Townshend as a rock opera that tells the story about a "deaf, dumb and blind" boy, including his experiences with life and his relationship with his family.
Townshend came up with the concept of Tommy after being introduced to the work of Meher Baba, and attempted to translate Baba's teachings into music. Recording on the album began in September 1968, but took six months to complete as material needed to be arranged and re-recorded in the studio. Tommy was acclaimed upon its release by critics, who hailed it as the Who's breakthrough. Its critical standing diminished slightly in later years; nonetheless, several writers view it as an important and influential album in the history of rock music. The Who promoted the album's release with an extensive tour, including a live version of Tommy, which lasted throughout 1969 and 1970. Key gigs from the tour included appearances at Woodstock, the 1969 Isle of Wight Festival, the University of Leeds, the Metropolitan Opera House and the 1970 Isle of Wight Festival. The live performances of Tommy drew critical praise and rejuvenated the band's career.

Track names and timings vary across editions; some editions have two tracks merged into one and vice versa. "See Me, Feel Me", for example, is the second half of "We're not Gonna Take It", but is its own track as a single and on the 2003 deluxe edition.[68]All tracks written by Pete Townshend, except where noted.