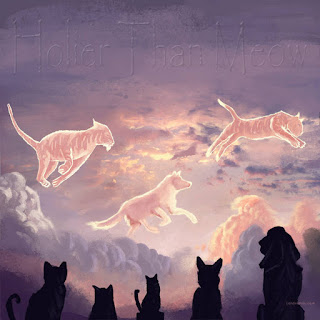 Hymnomancer has released their first album: Holier Than Meow
Among the members of the band is Kodiak, Alaska's own Keegan Keplinger.
Holier Than Meow was recorded in Gator's basement (in various rooms).
Album art by: LorDeimos lordeimos.deviantart.com
All songs mixed by Jeremy J. Porche, mastered by Hymnomancer. 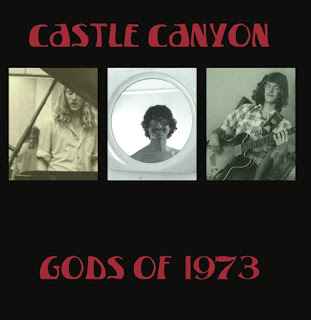 Total time 47:08
Line-up / Musicians
- Fred Chalenor / bass
- Erik Ian Walker / keyboards
- Paul Elias / drums
Castle Canyon biography
US band Castle Canyon started out in 1973. Friends from Portland, Oregon that had a shared fascination for shroom hunting and weird music. They wrote a handful or so of tunes back then, but their local environment wasn't the best to pursue music outside of the mainstream format, and life and circumstance saw to it that the band fell apart sometime around 1975.

Some 20 odd years laters Fred Chalenor and Ian Walker reconnect, as they had on several occasions over the years, but now they had the means and possibility to do something with the material created back then. That they had found a drummer, paul Elias, who could connect with their visions from yesteryear was the vital ingredient needed for this to happen.

Compositions were brought forth, examined and tweaked. And in 2009 the final result was released as Gods of 1973. The document of a bygone era, of a mental state of mind, and a creative effort that for a generation had nagged at it's creators to be released, set free, and be known.

If there is a future as well for this trio remains to be seen. The distant past has been released, but over the years each member has attained and gained skills and experiences that might just lead to a new creative hothouse being established. And they do have a third member as well these days, one who can add other influences to the mix. The potential for new productions seems to be present, perhaps even without the need of the thrills of shroom hunting to release it. 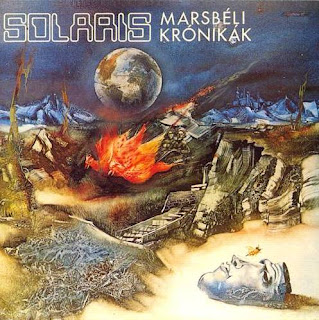 Solaris is a progressive rock band from Hungary. Established in 1980, the band went through several formations. Their music has a strong melodic content, often laced with Eastern European themes, and is highlighted by the use of dynamics and extended thematic development. There is a great deal of interplay among the lead instruments of flute, guitar and keyboard which is used regularly to develop their themes. The emphasis is not on providing solo spots for the various instruments, but rather in employing those instruments within the context of the development of the individual piece.
The band's name is a reference to the Stanisław Lem sci-fi novel, Solaris. The first album's title is a reference to The Martian Chronicles. The members have said that they were influenced by these - and other - sci-fi books.
The majority of Solaris' songs are instrumentals. The first track on their first LP, Marsbéli Krónikák, is an exception, with a few lines spoken over the music. The pitch-shifting, distortion, and album's theme have led many listeners to assume that the voiceover is in a putative Martian language, but it's actually in Hungarian: "Megrepedt tükrök (Cracked mirrors) / Kormos acélfalak (Sooty steel walls) / Halott szeméthegyek (Dead piles of garbage) / És szennyes tavak (And polluted lakes) / Azt mondod, itt élt valaha az ember? (Do you say mankind used to live here?)". "Egészséges Optimizmus" (Healthy Optimism) from the SOLARIS 1990 LP also has an introductory voiceover in Hungarian, and chanting in Latin[verification needed] appears in several tracks on the album Nostradamus: Próféciák könyve.
In June 2003, Attila Kollár said in an interview that the band is still alive, and they will start working on a new studio album that year.
Following their regular albums (and a live double CD recorded in 1995 during the Progfest in Los Angeles), the band also started a 3-volume "Official Bootleg" series. As the title says, these contain recordings that were never officially released before and consist of mainly live material. The title track of the second volume was originally intended to appear on the first album but has never been recorded in the studio.
In December 2007, drummer László Gömör told Alternative Press magazine that "the band has made few attempts to reunite and it seems unlikely (Solaris) will reunite."
Recently, it was announced that a brand new studio album 'Martian Chronicles II.' will be released on October 26, 2014.
Posted by The Yellow Porcupine Links to this post

Epsilon in Malaysian Pale was recorded between June and July 1975, following Tangerine Dream's Australian tour, and was heavily influenced by the places they had visited whilst on the tour.
The album consists of two instrumental compositions, each originally filling one side of vinyl. The first, "Epsilon in Malaysian Pale", is a Mellotron-based piece, inspired by Froese's visit to a Malaysian jungle. The second, "Maroubra Bay", is a more synthesiser-based piece named after a place in Australia. "Maroubra Bay" later appeared on the compilation album "Electronic Dreams", but was accidentally recorded backwards. [1]
In 2004, the album was reissued in remixed form by Froese's own Eastgate label, with a new cover based on that of the original.
TRACKS:
1. Epsilon in Malaysian Pale - 16:26
2. Maroubra Bay - 17:00 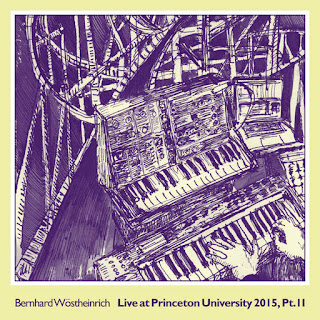 Tonight we'll be playing Part Two of "Live at Princeton University 2015" which is available as a free download here.


Bernhard Wöstheinrich elicits meaning from abstraction in electronic music and painting. He has studied graphic design and has created an eclectic body of work in both graphics and music.
Among others he has worked with electronic musicians Ian Boddy, Erik Wøllo and Conrad Schnitzler and filmmaker Telemach Wiesinger. Bernhard has created numerous album artworks for the DiN, Unsung Records and Ozella labels and has been exhibiting his evocative paintings in his native Nordrhein-Westfalen, Germany, for the last 20 years.