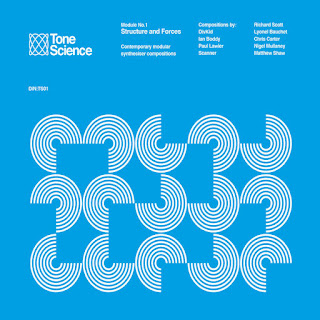 Introducing a new sub-label, Tone Science, from the DiN label.

From the DiN Bandcamp page:    DiN was initially set up in 1999 by well known UK synthesist Ian Boddy to bridge the gap between the analogue music of his heritage and the emerging digital possibilities of the future. This label has always forged it’s own independent path and to date has released 54 physical CD albums as well as 19 download only releases.

Even after being involved in music since the late 1970’s Boddy has continued to explore new sonic territories and in 2016 he released what was probably his most experimental album in “Tone Science” (DiN48). This album comprised five long, slowly evolving self playing compositions realised entirely on his vast arsenal of modular synthesisers. Boddy’s love of the analogue sound has been well documented not only through his own releases but many sound and sample libraries. These instruments all but disappeared in the 1990’s but recent years has seen an unprecedented growth in interest in this form of synthesiser with a proliferation of both module manufacturers and performers using these highly flexible and personal systems.

Thus, inspired by his “Tone Science” release, Boddy has set up this sub-label to feature artists and performers working in the field of modular synthesis. The first release “Module No.1 Structure and Forces” is a compilation album featuring nine artists from different musical backgrounds with the common thread being that all the tracks were composed entirely with a modular synth system.

The album opens and closes with the ambient soundscapes of two tracks by DivKid and Matthew Shaw who run the well respected Modular Podcast. Boddy himself follows the opening track with an extension to his original “Tone Science” album with another aleatoric self playing composition in “Tone 6”. Paul Lawler and Nigel Mullaney are both heavily involved in library music and soundtrack composition and their two multi-layered compositions showcase the cinematic possibilities of the modular synth world. The remaining four tracks are more rhythmic in nature with the beautiful ambient washes of “If Wishes Came True” by Scanner leading into the hypnotic ostinato patterns of “Ghatam” by Richard Scott. French Buchla wizard Lyonel Bauchet ramps up the intensity with an elegantly constructed pulsing track before Chris Carter (Throbbing Gristle) ends the rhythmic proceedings with the grimy, dubby bass powered “Frieze Relief”.

Boddy has curated both the artists and tracks on this album to flow in a musical way and not just be a collection of equipment heavy demos. Though fascinating and always cool to look at, it is important not to get lost in the gear for gears sake syndrome. Having said that this album features Eurorack, Serge, Buchla & Hordijk modular systems and the nine tracks show how varied and flexible these instruments can be.

“Tone Science Module No.1 Structure and Forces” is just the first of what Boddy intends to be a series of releases on this new sub-label featuring artists and musicians working in this ever fascinating and varied musical field.

2) Ian Boddy - Tone 6 - 9:02
This aleatoric self playing composition features my Serge modular and is an extension to my original Tone Science (DiN49) album released in 2016.
www.ianboddy.com

3) Paul Lawler - Virus - 7:43
A complex, organic soundscape with symphonic builds and falls, evolving colours, and strategic spaces in the ambience to draw the listener into this modular and alien world.
www.paullawler.org

4) Scanner - If Wishes Came True - 6:27
Like all my modular compositions this composition was recorded entirely live, combining live radio transmissions with a very hands on performative use of my modular system.
www.scannerdot.com

5) Richard Scott - Ghatam - 6:14
Ghatam is a contemplative percussive piece composed using the Hordijk Modular. I am particularly intrigued with the quasi-acoustic resonant qualities of this instrument which in this track reminds me of a simple Indian clay pot drum, hence the title
richard-scott.net

8) Nigel Mullaney - Spherfear - 9:39
A composition that started with an abstract emotion, a lament to the fusion of Modular electronic music and the pure tones of orchestral instruments. A dead star adrift in an harmonic sea of binary modulations.
www.nigelmullaney.com

February 24, 2018, I had the pleasure of seeing the California Guitar Trio perform at MIM, the Musical Instrument Museum, in Phoenix, Arizona.   The second half of tonight's show is the setlist from that show; it is not an actual recording of that show, but rather a collection of performances of the songs they played that night.
Posted by The Yellow Porcupine Links to this post