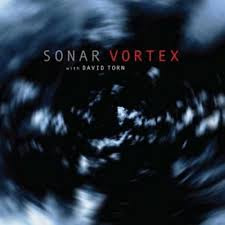 2018 release. Sonar's fourth release Vortex reflects the sound of surprise. After three uncompromising quartet albums exploring the edges of minimalist groove, the Swiss group has partnered with renowned guitarist, composer and producer David Torn for it's RareNoise debut. The band, comprised of guitarists Stephan Thelen and Bernhard Wagner, bassist Christian Kuntner and drummer Manuel Pasquinelli have long been celebrated for combining the visceral power and dynamics of art rock with a minimalist aesthetic. Their previous album, 2015's Black Light, attracted significant media and musician attention. Legendary avant-guitarist Henry Kaiser took a particular interest in the group and was determined to pair them up with Torn for their next album. 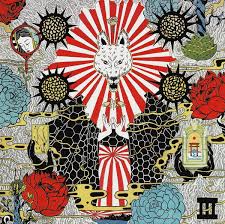 A review from "Can This Even Be Called Music"
Corima is a Zeuhl quintet from California that released their first album in 2007, followed by the acclaimed Quetzalcoatl, in 2012, and now 天照 (Amaterasu), which came out on November second, 2016. It features two compositions spanning fifty minutes and split into nine tracks. It was released on the label Soleil Zeuhl and is also available to buy on bandcamp.


I never was attracted to Zeuhl, at first. I tried to get into the progenitors of the genre, French band Magma, but was very underwhelmed and disappointed overall. However, as fellow writer Ignacio put it, it would be like listening to Black Sabbath to get into metal. The contemporary scene has evolved a long way from its garden of Eden. Corima are more influenced by the Japanese wing of Zeuhl than the French one, making it more energetic, demented, schizophrenic, and just thrashing you in its incomprehensible maw. Yes, that’s the one that I like.
天照 is split into two songs. First, ‘月読’ (Tsukoyomi), represents the Moon God in Japanese mythology. I believe there’s a slight typo on bandcamp, as it’s written ‘Tsukotomi’, but that word doesn’t lead to any convincing search result. The song is spread in three movements, adding up to almost twenty minutes in total. The second one is eponymous to the album title, and represents the Sun Goddess. This one consists of six parts, and makes up the bulk of the album, at twenty-nine minutes long. The former is an instrumental meltdown with its fast-paced odd-time signatures (and frequent rhythmic modulations), key changes, and intricate melodic and harmonic framework, and the latter adds an extra layer by including more vocals from violinist Andrea Calderón, keyboard player Paco Casanova, and guitarist and saxophonist Patrick Shiroishi.
Since no lyrics are available on line (and my physical copies are in the mailing æther), it’s hard for me to write on them at length. However, based on the more easily-discernible vocals on Quetzalcoatl, I would bet that they are in Kobaïan, a constructed language by Magma’s drummer, heavily influenced by German and French languages. However, there’s also a chance that the lyrics are, in fact, in Japanese. I’ll write a small update here once I receive the physical package, assuming that it contains the lyrics.
So, what should you expect, diving into 天照? Let’s have a look at the instruments on display: violins, keyboards, organ, saxophone, guitar, glockenspiel, bass, drums, and vocals. That’s quite a lot, but there can only be five or six of them at once, since the team consists of five persons. What’s interesting is that the violin and the saxophone are almost always present, and compliment each other wonderfully well. For an example of that, listen to ‘Amaterasu V’, where Andrea’s voice and violin, and Patrick’s saxophone interact to produce a truly outstanding motif, and serve as the leading role of the track.
In conclusion, Corima‘s third full-length, 天照, delivers an untamed flow of energetic, Japanese-influenced Zeuhl. The album is enjoyable to the core and will please anyone seeking a new musical challenge. Personally, I’m overjoyed to have stumbled upon it and to finally be able to make a connection with the promising world of Zeuhl music. I would recommend 天照 to any progressive music lover. 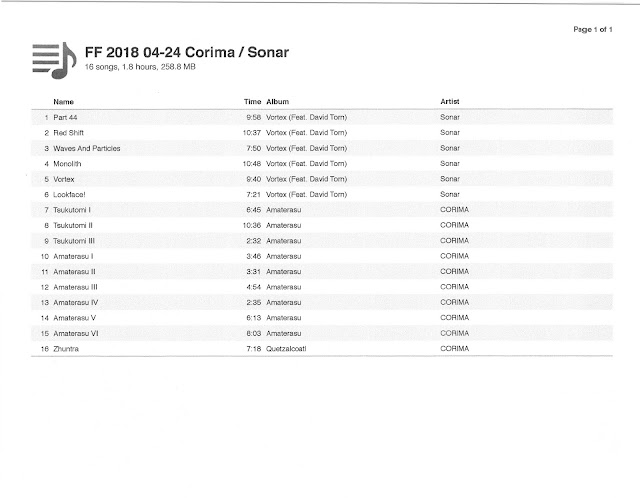 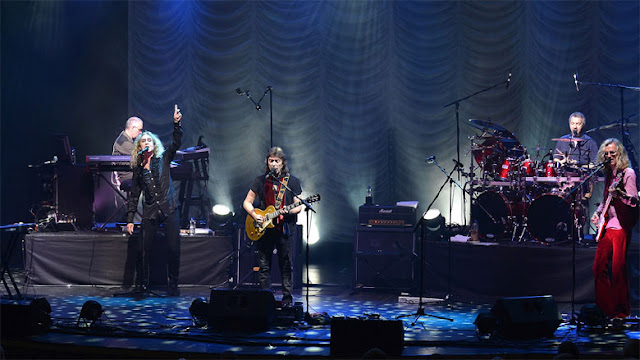 I had the pleasure of seeing Steve Hackett in concert on February 25 at the Van Buren Theatre in downtown Phoenix.  Tonight's show is a selection of live recordings recreating a portion of the set list of that show. 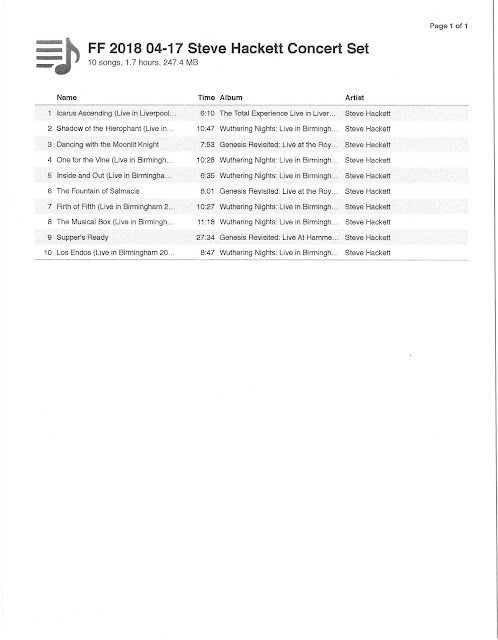 Alphataurus is an Italian progressive rock band from the Milan area. Under the original lineup Alphataurus released only one album, Alphataurus, dated 1973, at the peak of the European progressive rock wave. The album was generally well received [1] and work on a second album started, but due to “a string of personal events” the band split up in 1973.

From the Italian prog website:
A group from Milan born in 1970, Alphataurus were one of the many unknown Italian bands who suddenly had a recording deal, made an album and disappeared into oblivion.
Having played in some important festivals in 1972, the group was offered by Vittorio De Scalzi of New Trolls a recording deal for his new label, Magma.
ThTheir one and only album, Alphataurus, the first on the newly born label, is a masterpiece, so well crafted and played that it seems impossible that's been made by a group of unknowns. The singer Bavaro has a very original voice, keyboard player Pietro Pellegrini plays with competence and no self-indulgence, guitar-playing of Guido Wassermann is well cared and the rhythm section of Oliva and Santandrea creates a powerful background.
The album includes five long compositions of which Peccato d'orgoglio and La mente vola are the best, the latter featuring a nice moog intro and a stunning vibes solo.
Soon after this the band split while preparing the second album. A 1992 CD entitled Dietro l'uragano includes some demo recordings of unreleased instrumental parts with no vocals, the result is good though it obviously sounds incomplete at times.
Drummer Giorgio Santandrea was briefly in Crystals, while keyboardist Pietro Pellegrini has long collaborated with Riccardo Zappa and PFM.
Singer Michele Bavaro, from Bari, released a commercial solo album in 1988 (Surplace - Macaroni MAC 64701) and various CD's of Italian songs, playing throughout the world.
In 2010 three of the original members (Pellegrini, Wassermann, Santandrea) reformed Alphataurus to play at the Progvention held in Mezzago (near Milan). The new line-up, which includes singer Claudio Falcone, keyboardist Andrea Guizzetti and bassist Fabio Rigamonti, has stayed together for a few concerts, and at the end of 2011 the original drummer Giorgio Santandrea left his place to Alessandro "Pacho" Rossi.
The nice 2010 reunion concert has been issued on CD and LP in 2012 with the title Live in Bloom. In the same year the second official studio album by Alphataurus has finally seen the light, entitled AttosecondO, an album of excellent quality. 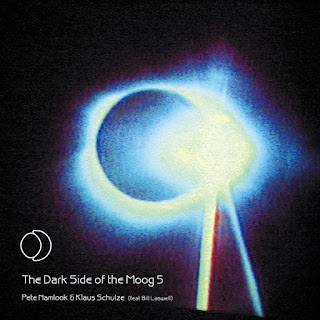 Pete Namlook (born 25 November 1960 as Peter Kuhlmann [ˈkuːlmaːn] in Frankfurt, Germany, died on 8 November 2012[1]) was an ambient and electronic-music producer and composer. In 1992, he founded the German record label FAX +49-69/450464, which he oversaw. Inspired by the music of Eberhard Weber, Miles Davis, Antonio Carlos Jobim, Chopin, Wendy Carlos, Tangerine Dream and Pink Floyd, and most important Klaus Schulze; He composed and produced his albums while many in collaboration with others.
As of August 2005, Namlook and company had released 135 albums (excluding re-releases, vinyl singles, compilations of existing material, and FAX releases beginning with PS, in which he personally is not involved in the music making).
Pete Namlook released many solo albums, as well as collaboration albums with notable artists such as Klaus Schulze, Bill Laswell, Geir Jenssen (alias Biosphere), Gaudi, Atom Heart, Richie Hawtin, Tetsu Inoue, Atom™, and Tying Tiffany.
"Namlook" is "Koolman", a phonetic rendering of his real name, spelled backwards.
Kuhlmann died on 8 November 2012 after suffering a heart attack.[2]

Pete Namlook (aka Peter Kuhlmann) and Klaus Schulze developed and nurtured The Dark Side of the Moog series. The Dark Side of the Moog 5 also features Bill Laswell. (He has collaborated on four of the CDs.) One of the coolest things on this disc is a 14-second intro by Robert Moog himself. Namlook, Schulze, and Laswell used "Adam's Psychedelic Brunch" as their base track title, a play on Pink Floyd's "Adam's Psychedelic Breakfast" from Atom Heart Mother. And, as listeners expect, this CD features the sequences, atmospheres, and ambience associated with this trio. The soundscape elements flow seamlessly within the intricate sound design. Namlook, Schulze, and Laswell are always at the top of their game. This Berlin school offering will appeal to fans of Ron Boots, Edgar Froese, Ian Boddy, and Paul Ellis.

Dark Side of the Moog 5


Posted by The Yellow Porcupine