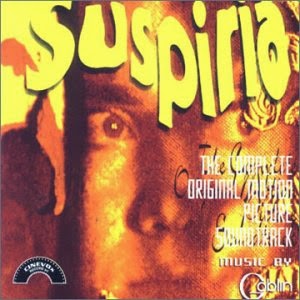 Goblin (also Back to the Goblin, New Goblin/Goblin Rebirth, the Goblin Keys and Simonetti's Goblin) is an Italian progressive rock band known for their soundtrack work. They frequently collaborate with Dario Argento, most notably creating soundtracks for Profondo Rosso in 1975 and Suspiria in 1977. CD re-releases of their soundtracks have performed well, especially in Germany and Japan. Goblin returned with a series of live concerts in Europe in 2009 and in North America in 2013.
Initially named Cherry Five, the band has been influenced by Genesis and King Crimson. Their early work spawned one eponymous progressive rock record, and they were then called in to compose the soundtrack for Profondo Rosso. The band changed their name to Goblin, rewriting most of the score, originally written by Giorgio Gaslini including the famous main theme. The 1975 soundtrack album was a huge hit.[where?] After a reshuffle in their line-up, and they put out an instrumental progressive rock album Roller, before working with Argento again for 1977's Suspiria. Other film soundtracks and a concept album (Il Fantastico Viaggio Del Bagarozzo Mark) followed, then the score for the European version of George A. Romero's 1978 Dawn of the Dead. Tracks 1, 2 and 5 from the European version are also in the American version of the album.
Despite their success, membership continued to be a revolving door, and the band also struggled to maintain their credibility. The remaining members continued to work on further soundtracks, and there was a partial reunification for Argento's Tenebrae (1982) (although each member of the band was credited separately, not as Goblin). The last collaboration with the director took place in 2000, with the film Non ho sonno (Sleepless).

Suspiria (pronounced [susˈpi.ri.a], Latin for "sighs") is a 1977 Italian horror film directed by Dario Argento, co-written by Argento and Daria Nicolodi, and co-produced by Claudio and Salvatore Argento. The film stars Jessica Harper as an American ballet student who transfers to a prestigious dance academy in Germany, which she discovers is controlled by a coven of witches. The film also features Stefania Casini, Flavio Bucci, Miguel Bosè, Alida Valli, Udo Kier, and Joan Bennett in her final film role.

Timothy Pure biography
American progressive rock band from Georgia has made 3 albums so far, two of them are concept albums. With a lush songwriting approach and a conceptual and highly symbolic perspective on lyrics, the band excels in building up structures of emotional richness that allow for an uninterrupted storyline immersed in drama and sharp social analysis. Their music is a mixture of sweet atmospheres and fine prog passages. Certainly influenced by PINK FLOYD, they manage to produce a typical dark and melodic sound with very strong lyrics.

"Blood Of The Berry" is a concept album that tells a story of love and sacrifice. The music features light and dark musical tones and flows which is what makes this American band so good. The last album "The Island Of The Misfit Toys" (2000) is something more than a prog album: music and words seem to tell us a story you never would be over. This album describes the problems and nightmares children and adolescents deal with nowadays (mainly because of war or child abuse). Matthew Still has a beautiful and emotional voice, the instruments are played in a very subtle way and the production is high standard. Fans of bombastic or overly complex music would be advised to look elsewhere. This is very emotional music which should appeal to fans of concept albums. A must!

Tonight's theme is "Back to School" featuring groups from Alice Cooper to the Kinks to Patti Smith and beyond.
Posted by The Yellow Porcupine Links to this post