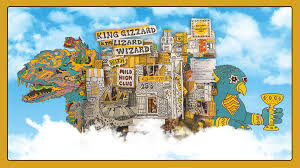 King Gizzard & the Lizard Wizard is an Australian rock band formed in 2010 in Melbourne, Victoria.[1][2] The band consists of Stu Mackenzie (vocals, guitar, keyboards, flute), Ambrose Kenny-Smith (vocals, harmonica, keyboards), Cook Craig (guitar, vocals), Joey Walker (guitar, vocals), Lucas Harwood (bass), Michael Cavanagh (drums, percussion), and Eric Moore (drums, percussion, management). They are known for their energetic live shows and prolific recording output, having released 13 studio albums since their formation.
King Gizzard'sfull-length album, Sketches of Brunswick East, a collaboration with Alex Brettin's psychedelic jazz project Mild High Club, was released on 18 August 2017.[47] Taking inspiration from Miles Davis' 1960 album Sketches Of Spain, as well as the band's base recording location of Brunswick East in Melbourne, it is a jazz-improvisational album. Mackenzie described the record as "perhaps representing greater changes that are happening in the wider world, and (this is) our attempt to find beauty within a place that we spend so much time", referring to the constant changes in their neighbourhood. 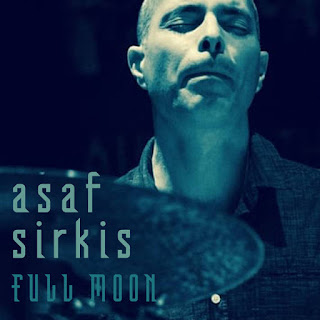 "Listening to Asaf Sirkis" at work, two things are immediately obvious: passion and commitment. Blessed with technical skills that are disarmingly under-played, his middle-Eastern sensibility balances the potentially volcanic with the meditative and reflective. A master of creative surprise, it’s on the edge of your seat listening when Asaf’s in town." - Dr. Bill Bruford

More recently, Sirkis has been working in a collaborative quartet with singer Sylvia Bialas, which also features keyboardist Frank Harrison and bassist Patrick Bettison, but perhaps most significant is his recent affiliation with New York's MoonJune Records. Sirkis made his first MoonJune appearance alongside fellow Israeli expat, bassist Yaron Stavi, on guitarist Mark Wingfield's critically acclaimed Proof of Light, but the fall of 2016 will see the percussionist's involvement with the label accelerate significantly.

Sirkis made his second MoonJune showing in September 2016 on Dwiki Dharmawan's Pasar Klewar, an ambitious double-disc set that also includes other names either already familiar or destined to become so to MoonJune fans in the coming year; in addition to Wingfield, guitarist Nicolas Meier, Yaron Stavi, Italian vocalist Boris Savoldelli and Gilad Atzmon all join Sirkis in making the Indonesian pianist/keyboardist's sophomore effort for MoonJune a truly earth-shattering, trans-cultural affair that blends unrepentant jazz improvisation with music indigenous to Dharmawan's home country.

Coming in the early 2017, the result of an intensive six days' recording in Barcelona, Spain this past winter will see no fewer than four MoonJune releases involving Sirkis: first, the percussionist joins Stavi, Wingfield and progressive trio Stick Men's touch guitarist Markus Reuter for The Stone House; following that, a collaborative trio recording with Wingfield, Reuter and Sirkis; a new Wingfield recording with Stavi and Sirkis; and, finally, a new recording from Serbian guitarist Dusan Jevtovic - whose MoonJune debut, 2014's Am I Walking Wrong?, was well-received by critics and fans alike - that will include Sirkis, in addition to fellow Serb, pianist Vasil Hadzimanov.

It's a busy year ahead for the London-based percussionist, and that's only counting recordings that have already been made. With Sirkis' remarkable ability to fit into any musical context and sound like he's been at it for his entire life, things can only look even further up for this tremendously talented, empathically intuitive and, above all, supremely musical percussionist.