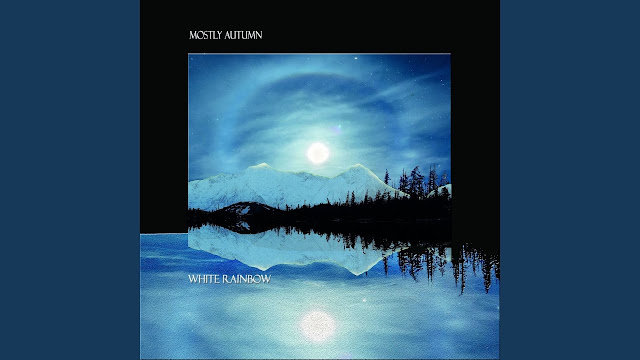 This week FreeForm returns to its progressive rock roots by featuring Mostly Autumn's  2019 release White Rainbow.
According to The Prog Mind:

Sometimes, albums just appear out of thin air.  That’s what it felt like for the new Mostly Autumn record.  I see now that Prog Magazine shared the information, and the band did, too, but for some reason Facebook decided to omit it from my timeline, so the album seemingly came out of nowhere for me.  In fact, the limited edition was mailed out to fans around Christmas, so some people have had it for a couple months already.  In the end, the band seems to consider this a 2019 release, and I believe the release date was officially the 1st of March.
Mostly Autumn hails from the UK and has been at the game since 1995.  The band currently consists of Olivia Sparnenn on vocals, Bryan Josh on guitars and vocals, Chris Johnson on guitars, Iain Jennings on keyboards, Angela Gordon on flute and keys, Andy Smith on bass, and Alex Cromarty on drums.  A couple things to note: This is Olivia’s fifth album with the band since the original singer left in 2010.  This is also only the second album without original rhythm guitarist Liam Davison after his death in 2017.
Mostly Autumn has been around so long that I feel as if progressive folk rock is literally defined by them in some ways.  Their music is definitely progressive rock, but they focus on soaring vocal melodies, momentous guitar solos, hefty folk portions, and organic atmospheric accents that elevate the whole experience.  Hearing one of their albums will truly transport you to dark forests, starry night skies, and inner turmoil.  So, this band is more like Renaissance than like the typical prog legends of yesteryear.
“White Rainbow” feels far more textured than any of their past albums.  The music come across as effervescent, mysterious, and nostalgic.  You will again hear weighty portions of folk and Celtic music, but progressive rock shines through in several important moments, such as the 19 minute long title track.  It’s truly a haunting experience from beginning to end, and that is exactly what I want from a Mostly Autumn record.
This is one of those albums that just has so many “heavy hitter” songs.  It seems like every song on it is well-written, well-structured, and a pure joy to behold.  For instance, “Procession” and “Viking Funeral” begin the album.  “Procession” is beautiful Celtic music intro, and you’d think that “Viking Funeral” would follow this ethnic suit, but it actually has more of an electronic overlay to it that gives it both modern and an ancient feelings.  The combination is outstanding.  The song actually revisits some melodies from my favorite Mostly Autumn album, “The Ghost Moon Orchestra”, and the baritone vocal harmonies near the end are perfect.
Once you move passed such an amazing couple of tracks, you almost expect a filler song.  However, what we get is “Burn”, the first track with Olivia on lead vocals.  It is a brightly shining star in the exquisite darkness of this album with huge melodies and this overwhelming sense of longing.  “Run for the Sun” follows and offers a similarly brilliant performance, specifically with an epic and emotional guitar solo.  And so the album continues with strong track after beautiful track.  It may be the band’s most consistent album to date.
Some of my other favorites are just as strong.  “Western Skies” starts out as a soaring ballad, but transitions into an orchestral gallop of huge proportions.  The title track itself, though, is a work of pure brilliance, and in some ways outshines everything else.  It is an epic only in the sense that is almost 20 minutes long: The way it plays, however, is as a collection of dark transitions that pass through melodic highs to riffing lows.  Rather than being an over the top expression of the Mostly Autumn sound, it is more subdued and subtle.  It feels introspective and grounded, and I absolutely love that: This restraint applies even for the crescendo near the end, which maintains its mature tone.
Overall, “White Rainbow” is a 78 minute album that doesn’t feel anywhere near that long.  It spirits you away to dark nights and distant feelings, but still feels organic, human, and grounded.  That is not an easy balance to maintain, but the band pulls it off with flying colors.  If you are fan of progressive rock with folk tendencies, like so many newer bands, it is time to visit the band that I consider to be the modern mother of them all. 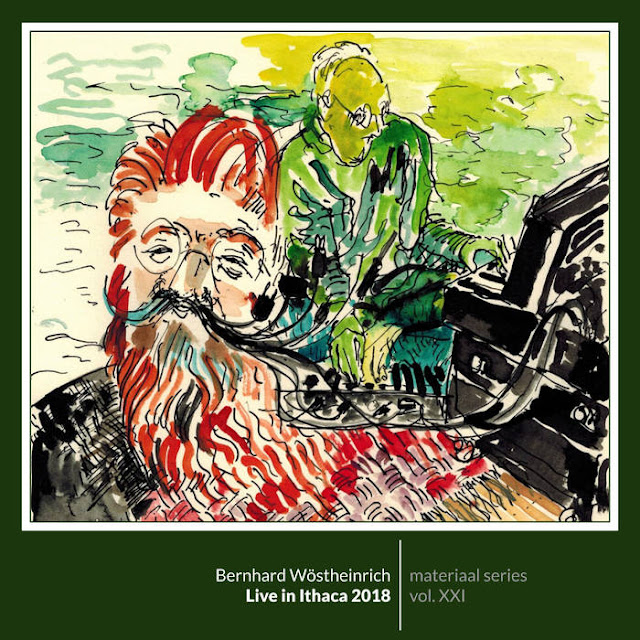 In the second half of tonight's show, we'll be playing Live at Electrozone Festival 2018, Part 1 from Bernhard Wostheinrich's 2018 release, Live in Ithaca.   This release is available at a pay what you want download at Wostheinrich's Bandcamp page - click on the title for the link.  There are several other titles also available as pay what you want at this link.
Materiaal Series, Part XXI

Composed, programmed, and recorded in real-time by a crazy mind and his laptop. No prepared sequences, patterns, or melodies used.

This was the closing performance at the Big EZ Festival; the first ElectroZone multi-day event at Risley Hall on the Cornell campus.

The ElectroZone's goal is to create an electromusic community that celebrates inclusion, collaboration, empowerment, and performance innovation.

"We were so fortunate to have Bernhard perform at our festival. He was our headliner and final performer. Crouched on mats on that dark the stage he was like a figure from a fairy tale, Bernhard’s music transported us to the shared place of our imagination and artistry. He was the perfect summary of all that we were trying to do with the festival. His music was not a conclusion to the event, but an inspirational mandate to go out and create. I am honored to know Bernhard and I wish all you listening the same privilege" - Elijah Joseph Weber-Han