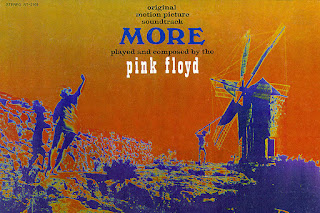 From Wikipedia:
More (released in the United States as Original Motion Picture Soundtrack from the film More) is the first soundtrack album and third studio album by English rock band Pink Floyd. It was released on 13 June 1969 in the United Kingdom by EMI Columbia and on 9 August 1969 in the United States by Tower Records.[2] It was the band's first album without any involvement from former band leader Syd Barrett, and is a soundtrack for the 1969 film of the same name, which was primarily filmed on location on Ibiza and was the directorial debut of Barbet Schroeder.
Unlike its predecessors The Piper at the Gates of Dawn (1967) and A Saucerful of Secrets (1968), More received mixed reviews from critics.
More is a psychedelic rock[3] soundtrack album which contains some acoustic folk ballads, a genre that appeared sparsely on Pink Floyd's later works. It also contains some of the band's "heaviest" recordings, such as "The Nile Song" and "Ibiza Bar",[4][5] as well as several instrumental tracks, featuring their experimental and avant-garde approach.
This is Pink Floyd's first full album without founding member Syd Barrett, who was ousted from the group in 1968 during the recording of A Saucerful of Secrets. It is one of only three Pink Floyd albums to feature David Gilmour as the sole lead vocalist, the others being 1987's A Momentary Lapse of Reason and 2014's The Endless River, and it is also the first album to be produced by Pink Floyd without assistance from Norman Smith. More was recorded at Pye Studios, Bryanston Street, London W1 and engineered by Brian Humphries.[6] It is the only album in the band's discography not to have a lead vocal from Roger Waters during his tenure in the band (1964–1985).
Two songs can be heard in the film which were not included on the album: "Seabirds"[7] and "Hollywood". Those songs, as well as two other songs from those sessions,"Theme (Beat Version)" and "More Blues (Alternative Version)", were released in 2016 in the box set, The Early Years 1965–1972. The set in which these tracks appear, 1969: Dramatis/ation was made available as a standalone release in 2017. "Seabirds" is not the track heard in the film, but a reworking of "Quicksilver". 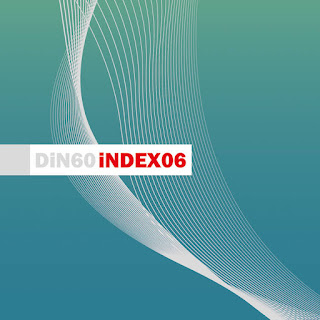 As with the previous five DiN samplers DiN label boss Ian Boddy has mixed and cross-faded the 18 tracks into a continuous ambient mix that not only showcases the albums featured on the release but presents an exciting and varied title in its own right. It also highlights the varied and intriguing music that the DiN label offers on its releases from deep analogue synth grooves through vibrantly melodic instrumentals to powerful, epic ambient atmospheres. An intoxicating mix of the old and new beautifully presented in a slimline cardboard wallet with an extra flap which just adds to the value and collectibility of this release.

Furthermore this compilation falls in the same year that the DiN label is celebrating its 20th anniversary. This is no small feat for a niche independent label and DiN is finally getting some of the recognition it so justly deserves. DiN60 will be included as the subscribers free CD in the July issue of the well respected magazine Electronic Sound and is also pencilled in to be featured on the Bandcamp main web page in the same month.

This compilation edited from the original tracks by Ian Boddy - March 2019.